My Book Review: Live Free Or Die – This Is The Most Important Election Of Our Lives

Book Title: Live Free Or Die: America (And The World) On The Brink 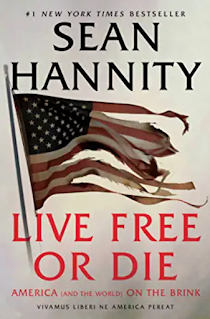 Sean's LIVE FREE OR DIE: AMERICA (AND THE WORLD) ON THE BRINK is a well-written book that painstakingly explains why America (and the world) is in serious trouble. I'm an American, a conservative, and a proud nationalist.  America is the greatest country in the world, and I'm proud to live here.  But America is currently being polluted by crazy leftwing radicals, and if we don't get a handle on it, America, as we know it, will die.

LIVE FREE OR DIE is not as exciting or entertaining a read as, say, a book by Milo Yiannopoulos or Donald Trump Jr., but in these serious times, that doesn't matter. Read LIVE FREE OR DIE to educate yourself on how radical leftists worked their way to the attention they got from corrupt politicians, like Nancy Pelosi, and a corrupt media.  Read the book to understand the motives of social justice warriors, leftists who control our academia, the deep state, and more.

Speaking of the deep state, remember when it used to be considered a myth?  Not anymore. Thanks to an outspoken President Trump and a few other Republicans who are not spineless, we now know the deep state is very real.

I agree with President Trump that the only way he'll lose this election is through leftist rigging. The radical left will do anything, by any means necessary, to gain power, and that includes rigging the election.  Their mail-in ballot shenanigans have already started.

As Sean explains, we can't lose this election.  If we do, the radical left's socialist vision – Green New Deal, open borders, socialized medicine, abolishing the Electoral College, etc. - will win.

Next Up: The New Reality

Who do you think will prevail in this election and be sworn-in come 2021 – Trump or Biden?  Let me know in the comments.