My Book Review: The Trial of Roger Stone - When the Deep State Doesn't Get Its Way 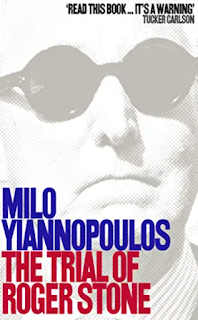 Book Title: The Trial of Roger Stone
Author: Milo Yiannopoulous
When I was a liberal, I thought America was a just country.  I felt a kangaroo court system didn't exist in the U.S.A.  Now that I'm a conservative, I'm not so naïve.  I read books, and I get my information from other sources besides, for example, cable news. I'm sorry I didn't get a clue until I became a conservative, in my middle-age, but better late than never.  Thank you to Young Patriot Rising for recommending that I read and review THE TRIAL OF ROGER STONE.

THE TRIAL OF ROGER STONE, by Milo Yiannopoulos, angered me, just like so many other conservative books I've read, such as PROFILES IN CORRUPTION or  UNFREEDOM OF THE PRESS, angered me.  I love the United States of America, but I can't believe I live in a country where the kind of injustices, such as what was done to General Michael Flynn, happen here. All because a crooked woman didn't get her turn in the White House, and all because a bunch of other deep state swamp creatures hates President Donald Trump.

Roger Stone is a 67-year-old political consultant, a loyal Trump supporter, a fashionable dresser, and author of bestselling books, such as THE CLINTONS' WAR ON WOMEN.  He is also HATED by the left, especially the fake news leftist media.  We all remember when a S.W.A.T. team, helicopters, etc. stormed Stone's house in Fort Lauderdale to march him out in handcuffs in front of the cameras owned by fake news CNN as if he were some serial killer found after a long cold case.

In THE TRIAL OF ROGER STONE, Milo, who was there for the trial, explains in exquisite detail why Judge Amy Berman Jackson is one of the most crooked federal judges you'll ever meet, and why the jury, composed of Trump haters such as Tomeka Hart, was stacked against Stone from the start. Says Milo, "This is about Roger Stone.  But it's also about the wretched systemic failures and wretched people in the American intelligence, law enforcement, and political establishments that some people collectively call the "deep state."

I remember when the "deep state" was universally considered a conspiracy theory, especially by leftists.  However, thanks to our great President Donald Trump, who exposed the "deep state" as very real, it is no longer a myth.  The "deep state" is a term that many conservatives now use. The players in the "deep state" such as Judge Amy Berman Jackson, Hillary Clinton, Barack Obama, James Comey, John Brennan, James Clapper, Peter Strzok, Lisa Page, Robert Mueller, Adam Schiff, and on and on have been exposed for the snakes in the grass that they are.

Milo, a friend of Roger Stone's, is one of my favorite writers. He is an award-winning journalist and a New York Times-bestselling author. Milo is gay, proudly flamboyant, and out-of-the-closet. He is also one of the most controversial conservative figures (due to what comes out of his mouth, not because he's gay) right there along with Alex Jones.  DANGEROUS, Milo's most famous book, is one of the best books I've ever read. I couldn't put it down. I don't agree with everything Milo says, but he is a brilliant man, and he's an excellent writer.

I learned the truth about Milo when I watched him on a Tucker Carlson episode.  I was a new conservative, and therefore, I still believed some of the bullshit spewed by leftists.  I didn't like Milo, even though I had never listened to him or read one of his books.  I had let leftists think for me concerning the entire Leslie Jones Twitter saga.

It wasn't until I watched Milo on Tucker that I realized how wrong I was.  Thankfully, today, I have become thoroughly educated about Milo. I think for myself when it comes to the 35-year-old conservative as I do with every other issue.

Anyone familiar with Milo knows he's got a mouth, which gets him in trouble. He doesn't hold back on describing Judge Jackson.

Jackson has the personality of stodgy fruit pudding and the countenance to match. She has a man's face, but a man's face left out in the sun, as though she has one of those floppy silicon serial killer masks permanently stitched to her head. She is unremarkable, frumpy, and her hair makes me gag. She comes across like a woman with no gay friends, which for a Democrat in the twenty-first century is unthinkable.  If it weren't for the three loud knocks on the door and an "All rise!" I don't think anyone would notice Amy Berman Jackson walk into a room.  Maybe that's why she became a judge, so people can't pretend they don't see her.

In THE TRIAL OF ROGER STONE, Milo gives us a thorough description of how Amy Berman Jackson's courtroom was a kangaroo court from the start. "Never in my life have I sat in a courtroom and watched a put-up job unfold before my very eyes, and experienced a chill creeping down my spine as I slowly come to realize the terrifying power of a team of government lawyers determined to take someone down, whether they committed a crime or not, and how the full might of the American jurisprudential system kneels to accommodate them," says Milo.

In the book, especially near the end, Milo takes cheap shots at Trump, a cheap shot at Turning Point U.S.A., etc.  Milo is the kind of person who likes attention.  So I think he's angrier that nobody on the right gives him that attention, at least not anymore. He's been, unjustly, banned from all the major social media platforms; he's not invited to major conservative events (such as the social media summit at the White House), and no prominent conservative ever talks about him.  Milo is, as I said earlier, controversial.  So he's basically persona non grata.  In other words, Milo is bad for business, and that's a chance you take when you're incredibly controversial.

That said, I do agree with Milo, 100 percent, that President Trump must pardon Roger Stone. On February 20, 2020, Stone was sentenced to 40 months in federal prison. According to Milo, the Stone family has lost their home, their savings, and their life insurance, all because he refused to give the deep state what they wanted. This kind of shit should never happen in America, but it does.

Perhaps Trump is waiting until he's re-elected to pardon Stone.  I don't know. But I learned a long time ago to trust Trump. He knows what he's doing. He'll pardon Roger Stone at the right time.

Next Up: A Nation Gone Under

Do you believe President Trump should pardon Roger Stone? Please let me know in the comments.


Patriots!  Check out the wide variety of patriotic gear at More94! 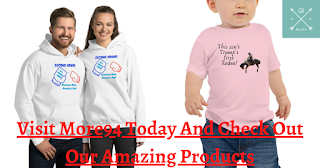