My Book Review: Fighting the Promise - What Happens When a Chinese Government Invasion Disrupts Life 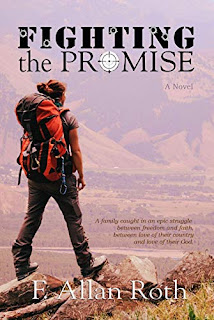 FIGHTING THE PROMISE, by F. Allan Roth, is an interesting religious fiction book, to say the least. It's not just the story of what happens when the Chinese government infiltrates America and takes over the American government. It's the story of how followers of the Mormon religion, living in Idaho, react to the infiltration. FIGHTING THE PROMISE is told from three different viewpoints: Stuart, Miranda, and Ellen.

F. Allan Roth is an American author who writes fantasy novels and LDS fiction. He likes to fly fish on the South Fork of the Snake River. He ties his own flies and builds his own bamboo fly rods and wooden boats. He also is an amateur mycologist, and enjoys hunting (and eating) wild mushrooms and berries. He and his wife, Jerelyn, live in Idaho. At last count, they have seven children, twenty-five grandchildren, and six great-grandchildren.

Let me say this at the outset. I am not a Mormon, and I know very little about the Mormon faith. So I tried not to let my ignorance about Mormons cloud my judgment.

You don't have to be a Mormon to read this book.  Anyone of Christian faith can relate in some way to FIGHTING THE PROMISE.  Christians are taught to trust in the Lord. However, that trust can get tested when things get tough.  How should we respond?

What bothered me about FIGHTING THE PROMISE is how Bishop Stuart Holliwell, the leader of the local Church of Jesus Christ of Latter-day Saints congregation, reacted to the Chinese taking over, especially with the devastation that happens. However, his goal was to follow the teachings of the Book of Mormon, specifically that America's collapse is a fulfillment of an ancient prophetic promise from the Book of Mormon.

That said, when Stuart's wife Elly makes an important decision, I was entirely on her side.  I thought to myself, "Good for you!  I would do the same thing." But again, I'm not Mormon, and I haven't studied the religion.

It also bothered me the way the Chinese conquered America. (Read the book to see what I mean.) All I will say is if we can get overcome in that way, we're not the America we are now.

As far as what I did like, F. Allan Roth does a great job with description.  He has mastered "show don't tell." As reported at the Reedsy blog, "Show, don't tell is a writing technique in which story and characters are related through sensory details and actions rather than exposition. It fosters a style of writing that's more immersive for the reader, allowing them to 'be in the room' with the characters."

However, although Roth is great with description, in my opinion, there's too much of it.  Frankly, FIGHTING THE PROMISE could have been told in half the amount of words Roth has used.

I also liked the way Roth takes us on an adventure from beginning to end.  He is not afraid to show us the best of humanity, along with the worst as peaceful lives change. I did think the ending was abrupt, which surprised me, given Roth's attention to detail throughout the previous parts of the book.

FIGHTING THE PROMISE is a religious fiction book that you should take your time with.  Read a few chapters, think about what you've read, then read some more. If you're like me, you'll appreciate some of what you read, and then other parts will frustrate the heck out of you.  The good news is that all of the emotions you feel when reading this book will likely tidy up with a satisfying ending, although, as I said, abruptly.  Purchase FIGHTING THE PROMISE Here! (Currently, the eBook is $2.99 or free with Kindle Unlimited.  You can also buy the print book for $11.99.)