My Book Review: The Terminal List: An Exciting Revenge Thriller! 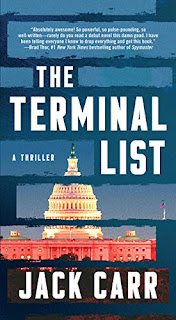 Before I get to my review, the basketball legend Kobe Bryant and his 13-year-old daughter Gianna died yesterday in a helicopter crash. In addition to their tragic deaths, the Altobelli family lost John Altobelli, his wife Keri, and their daughter Alyssa.  John was the head baseball coach at Orange Coast College. Christina Mauser, the assistant coach for Gianna Bryant's Mamba Academy basketball team, also died, as well as Payton Chester, a 13-year-old basketball player, and her mother, Sarah. Of course, the pilot, Ara Zobayan, died as well. My thoughts and prayers go out to their families.

My goal for Conservative Book Reviews is to review conservative nonfiction books. However, every once-in-awhile, I'll discuss a fiction book with a conservative feel, such as my review of THE HARVEST by John David Krygelski.

To be honest, the political/military thriller THE TERMINAL LIST, by former Navy SEAL Jack Carr, is a type I don't usually read. Don't get me wrong; I love the genre. I just don't typically grab it for reading material. Instead, my husband and I will watch that type on TV, such as the Amazon series "Jack Ryan" based on the Tom Clancy books.

That said, I loved THE TERMINAL LIST, not to mention the fact that I have a thing for Navy SEAL and military men.  Atria Books, a Simon & Schuster imprint, asked me to review the book, and I'm glad I did.  It is the first book in THE TERMINAL LIST series.  The second book in the series is TRUE BELIEVER, and the third book in the series is SAVAGE SON.  (SAVAGE SON will be published on April 14, 2020.)  Jack's books are realistic, and as such, because of his former security clearance, the Department of Defense has to review his books despite their being fiction.  If they drag their feet, that pushes back the release dates for Jack. 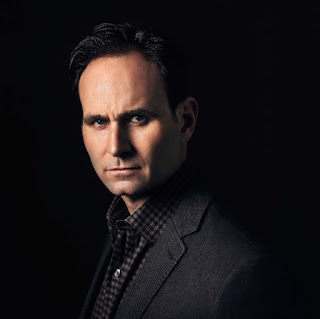 From his official BIO: "Jack Carr is a former Navy SEAL who led special operations teams as a Team Leader, Platoon Commander, Troop Commander, Task Unit Commander, Operations Officer and Executive Officer.  Over his 20 years in Naval Special Warfare he transitioned from an enlisted SEAL sniper specializing in communications and intelligence, to a junior officer leading assault and sniper teams in Iraq and Afghanistan, to a platoon commander practicing counterinsurgency in the southern Philippines, to commanding a Special Operations Task Unit in the most Iranian influenced section of southern Iraq throughout the tumultuous drawdown of U.S. Forces."

In THE TERMINAL LIST, Navy SEAL James Reece loses his team, and even worse, two people who are incredibly close to him.  Who's responsible?  The government, and ironically, with what we have seen exposed about our government, like the current shit we know about the upper echelon of the FBI, none of it seems like a stretch.  Knowing what the government has done, Reece, with nothing more to lose, is on a mission to avenge the deaths of his team and especially his loved ones.

If you're looking for spoilers in this review, you won't get them. It pisses me off when reviewers do that with fiction books.  So I won't do it. But what I want you to know is that Jack Carr is a bestselling author, and I quickly learned why after he drew me into the start of the book.

You see, the most important thing that an author can do to keep his or her audience engaged is to capture them within the beginning pages. Carr has written a scene that pulls you in right away and gets you thirsty for more.


If you respect the Constitution and you're sick of the corruption, this book fits right in. "Revisionist views of the Constitution by opportunistic politicians and unelected judges with agendas that reinterpret the Bill of Rights to take power away from the people and consolidate it at the federal level threaten the core principles of the Republic," Jack says. "As a free people, keeping federal power in check is something that should be of concern to us all. The fundamental value of freedom is what sets us apart from the rest of the world. We are citizens, not subjects, and we must stay ever vigilant that we remain so."

That's a comment that would turn off The Resistance. Still, normal, intelligent people who respect the Constitution, who don't hate America, and who recognize that the government has become a problem, won't have a problem with Jack's words.

This book is especially great for gun lovers. I respect the 2nd Amendment, but I don't know much about guns. (That said, that's what the glossary is for, right?)  I also love adventure, and I'm not offended by violence.  (You want a sweet, little book?  Don't pick this one up.)

I highly recommend THE TERMINAL LIST. It's fast-paced, exciting, and it contains excellent descriptions and attention to detail. I'm looking forward to reading TRUE BELIEVER and SAVAGE SON. Carr has managed to get me into reading a genre I don't typically read, and that's a massive feat for someone like me who tends to be set in her ways!

Next Up: Profiles in Corruption