My Book Review: Inside Trump's White House: The Real Story of His Presidency - Facts Over Fiction 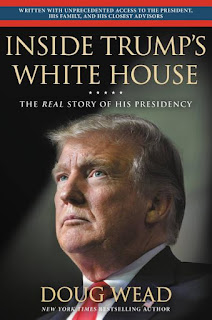 Happy New Year! I hope it's been good for you so far. It feels great to be back at my blog. I'm also excited to report that Conservative Book Reviews was selected as one of the Top 40 Conservative Political Blogs on the web. This is especially nice because I posted my first review on October 12. So my blog hasn't been around for long.

As we move into 2020, I've been working on organizing my home. I've been following the "52 Weeks To An Organized Home 2020 Plan." I like it because when you spend just 15 minutes daily to organize your home, you don't feel overwhelmed.

Another great chart I found is the "52 Week Money Challenge Printable Chart" at Money Challenge. You can register or not, it's up to you. Either way, it's free. You can customize the chart, including how much you want to save each week. I'm going for $5,000 by the end of the year, which is totally doable with this kind of system.

Now onto the review:

Like all conservative books, this one was filled with facts. Check out any leftist article or leftist book and what you'll find is secondhand or "anonymous" sources. But in INSIDE TRUMP'S WHITE HOUSE, we get the real deal directly from President Trump, Melania, Don. Jr. Eric, Ivanka, Tiffany, and more.  Bottom line, whatever leftists or The Resistance have told you about this family, you can safely ignore it. (But you knew that.)

In the book, Eric Trump says, "You have every joker in the world coming out with stories that are boosting the author's own self-importance or are simply inaccurate. It literally makes me laugh. Some of these people weren't even there. Some were, but they did not play the roles they said they were playing. Some didn't give the advice they claimed, and some of them spent time doing more harm than good. Then all of a sudden here is a book with them taking credit for winning the election! It's actually flabbergasting."

His comment made me think of when Sean Hannity interviewed Melania Trump and asked her what the hardest thing is she's had to deal with while being First Lady.  "The opportunists who are using my name and my family name to advance themselves . . . ," she said. "The problem is they're writing history, and it's not correct."

Doug Wead,  a New York Times bestselling author, has written more than thirty books. He has served as an advisor to two American presidents and co-authored a book with one of them. He also served on the senior staff at the White House. Wead is the only authorized biographer of President Trump.

It's no surprise to me AT ALL that Wead, and his family, received death threats from what law enforcement believe are left-wing activists warning him not to publish the book. They informed Wead (who has never been threatened before) that he and his family would be "bathed in blood" if the book came out. (When they go low, we go high . . . )

"What I discovered inside the Trump bubble was quite different from what had been reported," said Wead. No conservative or Patriot is surprised. Of the many accomplishments of President Trump,  exposing the media and the Resistance for what they are is one of his best. 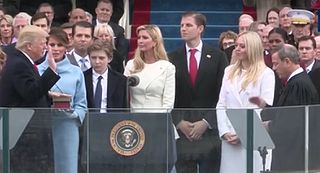 The first thing I did with INSIDE TRUMP'S WHITE HOUSE is look at the photos located in the middle of the book. It was cool to view family photos of the Trump family.

Then I got into the meat of the book. It probably contains stuff you didn't know. Examples?

1. Did you know that Ivanka became the nineteenth son or daughter of a president to serve his or her father? The New York Times in an article wrote, "While relying on family members for advice is hardly unusual for a president, giving them a formal role has few precedents." That's a lie. But we know "The Failing New York Times," as Trump has said, is one of the worst for fake news. In the book, you'll learn how hard working Ivanka is and how important her work has been for America.

2. Did you know that the RNC wanted nothing to do with Trump the nominee, including giving the Trump campaign their list of their top 500 donors so that the Trump campaign could call them to raise money for the campaign? So Don Jr. and his team put together their own list and raised more money than the RNC did.

Today, the relationship is excellent, of course, and President Trump loves the RNC chairperson Ronna Romney McDaniel.  However, it was interesting to read how the RNC, used to establishment Republicans, didn't want to work with Trump.

3. Did you know Tiffany Trump sees her dad and stops by to say hi to Melania and Barron approximately every week? I was pleased to read this because the fake news media loves to say that Tiffany Trump has little to nothing to do with the family.

4. Did you know the Trump women's feet really do hurt and really do get swollen after wearing high heels all day? For example, during the Inaugural events, they all soaked their feet in cold water, and Tiffany Trump carried Band-Aids. I know that when I wear high heels, my feet kill me afterward. The same happens to them. The Trump women love high heels, but there's no such thing as magic high-heels, no matter how expensive they are.

5. Did you know Donald Trump highly respects Jared Kushner? You don't see him much on TV. So it was nice to learn more about him. I was surprised to learn how intelligent and logical he is. "Basically, there were two types of people: those who thought Trump was saving the world and those who thought they were saving the world from Trump. Over time, we got rid of a lot of the latter, " said Jared. That makes sense, given some of the people who are no longer in Trump's inner circle.

6. Did you know that magazines outside of the U.S. have featured our beautiful First Lady on their covers, such as France's "Paris Match"? (I will never forgive U.S. magazines and petty bitches such as Anna Wintour who openly snub the First Lady.)

7. Did you know President Trump once "quoted almost verbatim" three of Pastor Paula White's sermons on the value of vision? Paula (who is a friend and religious mentor to Trump) has said in her thirty-four years of pastoring, listening to someone quote her sermons almost verbatim was unique and highly impressive. Trump was confirmed as a Presbyterian and grew up in Norman Vincent Peale's church. Norman Vincent Peal's sermons profoundly influenced his life.

8. Did you know Melania Trump speaks English, Slovene, Serbo-Croatian, Italian, German, and French fluently? I knew she was fluent in many languages, but I didn't know which ones.

I will never forget what Wead wrote about Melania, "History will soon forget the bitter, angry voices of Melania's critics. Unfortunately for those antagonists, the stories, the photographs, and the video record of this remarkable first lady will survive and be witnesses against their pettiness and jealousy. Future generations will be able to see for themselves this elegant woman who glides softly through the angry storm of critics who try to hurt her and her son. There will be the future equivalent of entire bookshelves full of stories about this enigmatic and mysterious first lady. The envious and spiteful critics who snap at her and who are tormented by her power and poise will be long forgotten. History will provide Melania's revenge. "

Jared said, "A lot of countries are now waiting for the next president so they can get a better deal. They don't want to pay to clean up their own environment or to provide for their own security. They can just wait until they get a Democratic president or a weaker Republican president and then America will go back to paying for everything again."

I know that when Trump is done with his second term (none of the loser Democrats can beat Trump), I will cry. I know I'll never see a president like him again. In 2024, when Trump is gone, I may leave social media, especially Twitter, and just live the rest of my life hoping the country doesn't go to hell.

To quote Jared again," There will come a day when people will miss him greatly. He goes for the big thing and he gets it done. Nobody can keep up with the spirit in which he leads."