Hello!! Young Patriot Rising here. Since the first guest posts on our blogs went well, we decided to do another! Follow me on Twitter! Check out my blog, and please subscribe! https://youngpatriotrising.blogspot.com 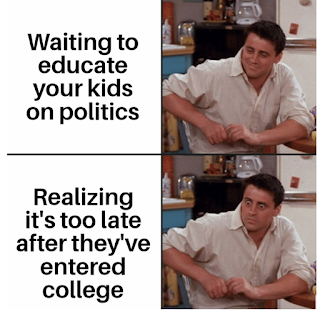 The Left does a fantastic job of indoctrinating young people. The Left’s propaganda influences many conservative children. To conservative parents reading this, start talking to your kids about politics! This is not only to help your child; this is to help you. I’ve read stories from parents of conservative children almost losing or did lose their kid to the Left, and have little relations. Now, I don’t mean have your kindergartner advocating for climate change, nor do I mean telling your kids, “You must be a Republican!!” What I mean is sitting down with your child to explain certain political issues, and why you support/disavow that issue. Teach them our history, the laws in the country, and each political issue. You’ve got to show commitment and be with them the entire way. Be willing to learn with your kids. Your kids will understand right from wrong and lies from truth. Educating your children about politics will determine what change occurs.

First, educate your kids about respecting different opinions. Democrats and Republicans hold equal fault for insulting others because of political differences. Diversity of thought is acceptable! I’m friends with Republicans and Democrats. No matter where your kid ends up, whether liberal or conservative, let them know it’s okay to have different opinions. Don’t be the person who won’t accept someone because of their political ideologies. If that’s happening already, then use this as a demonstration of how politics can become toxic if there isn’t mutual respect. Also, not every child is the same. I frequently converse with my parents on politics, whereas my sister isn’t always as talkative. You’ve got to know your kid, and how to present this information. Even for what age is good to talk about politics, I couldn’t tell you. Only you can know if your kid understands what you’re teaching. Kristen Hawkins taught her 10-year-old son about abortions. “Isn’t that too young?” Depends! If you’ve got an issue with that, how do you feel about kindergartners learning about transgenderism, same-sex marriages, and porn? The Left isn’t holding back their indoctrination, so we must be educators! Mahdgalen Rose explains why conservative parents should talk politics with their children. 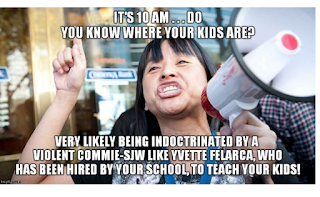 Leftist indoctrination is in 90% of our lives. Leftists don’t care that a 5-year-old is at a Pride parade watching almost naked men twerk on each other. There are no morals for them.  Conservative parents are more conscious. Leftists will teach your kids how GREAT socialism is, how Christianity is hateful, how the armed forces/police are racists, how Trump-supporters are the enemy... you get the idea. Why else are you seeing stories of 14-year-olds attacking a classmate? The Left doesn’t care who’s hurt if it’s for their cause. Also, many young people get their news from social media (myself included). Social media limits conservative content, so kids will only get the “truth” from the lying Left. Leftist elites use fear and manipulation on the less knowledgeable and less mature. That’s why many young Americans support socialism and $15 minimum wage. Milo Yiannopoulos did a hilarious take on how colleges change good conservative students. Watch: 25 – 4:40 (there is some cursing).

An equally important reason to discuss politics with your kids is so they know how to defend their positions. Ask a college Leftist what crime Trump committed to be impeached. They can’t! “He’s committed so many, but I can’t name one off the top of my head.” Don’t let this be your child. Show them there is not one sentence in the Constitution that says a President can be impeached for “being a lunatic.” Most Leftists don’t know why/what they’re protesting/supporting, but that “it’s for a worthy cause.” They have no foundations for their beliefs. Do you want your kid like this? Give them a firm foundation that can’t be swayed by indoctrination. With this foundation in knowledge, 1) they’ll be more credible, 2) they won’t sound like those who can’t give an exact reason, and 3) will be able to comprehend their beliefs in the real world. Your kids can intellectually and respectfully defend their beliefs.

Teach, don’t force. Don’t mean shove your opinions down their throat, but teach them. You’ll just push them further away, and closer to the Left. Since middle school, my parents talked politics with me. They’d play Fox News or give me articles to read. I told my parents’ story about living through socialism in a post (link below). That’s why I’ll never support socialism. With the election of Trump, everything my parents taught me clicked. My parents never “hopscotched” around politics. They didn’t push their views but taught through examples and research. I believe that’s best for all conservative parents. They never thought I’d be so passionate about politics! 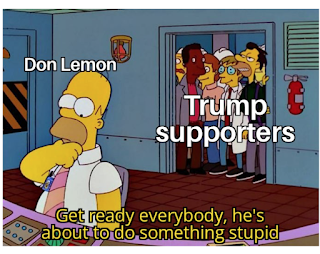 If you don’t want to lose your kid or have them angry and depressed, parents, you must talk politics with their kids. What is the harm in teaching your kids about what’s happening? If they ask, “Why does the Left call Trump supporters illiterate?” YOU CAN TELL FACTS. The Left claims they hate divisiveness, yet are guilty of that themselves. Education isn’t indoctrination. Don’t believe the Left on that. It’s your house and family; only you and God have control. The development of your kids starts at home. You have to be committed to this like the Left is. Take the time to educate. You won’t regret it. Don’t let your kids become Leftist pawns. What are you waiting for? Go educate your kids on politics!