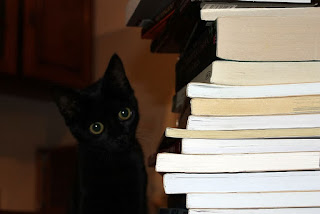 I look forward to returning to Conservative Book Reviews on January 12, 2020, with a book review of INSIDE TRUMP's WHITE HOUSE by Doug Wead.
Posted by CBR at 12:44 PM No comments:

My Book Review: Crisis of Culture: The Political Battlefield of the New Civil War - Knowledge is Power 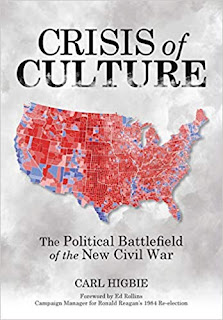 Let me say at the outset that if you're a leftist or even a liberal, you'll be, to use a term Donald Trump Jr. uses, "triggered" if you read this book. This is not to say you shouldn't read it if you are a liberal or a leftist. After all, I'm all about education. But I'm 100 percent certain you'll be triggered.

That's because Carl Higbie, author of CRISIS OF CULTURE, pulls no punches. He doesn't care if you're offended by the facts, and he lets you know that. That's just one of the reasons why I enjoyed CRISIS OF CULTURE. Two things that are driven home in this book is that President Donald Trump wants to "drain the swamp," and the Deep State is NOT a conspiracy. Trump knows it; Carl Higbie knows it, and every other conservative knows it.

From Carl's publisher Tactical 16, Higbie's "accomplishments include: traversing the globe as a U.S. Navy SEAL for nine years; running for a Congressional seat; serving as President Donald Trump's chief of external affairs for the Corporation for National and Community Service and as the Director of Advocacy for America First Policy and America First Action; serving on the board of directors for Whiskey Patriots, an online social media and e-commerce platform reaching military members, veterans, law enforcement officials, and patriotic Americans; and, serving as an advisory board member with Tree of Knowledge International Corp., a public company pioneering the CBD industry with a focus on veteran care and alternatives to opioids." Carl is the owner of Right Wing and his other website is Carl Higbie.

A word about Tactical 16, it "specializes in working with veterans, first responders, and their friends and families to publish their writing as a means to tell their story and for self-therapy." One hundred percent of the proceeds from Higbie's book goes back to Tactical 16. So check out this publisher and buy the book!

Now, getting back to the review, the best part of CRISIS OF CULTURE, in my opinion, is the way Higbie breaks down what conservatives stand for and what liberals stand for. You may call yourself a conservative, but do you know why? Can you articulate it? Higbie covers all the essential ideological fronts.

For example, on abortion, liberals believe that "a fetus is not a human life, it is a part of a woman's body, so it does not have separate individual rights." On the other hand, conservatives believe "human life begins at conception; therefore, abortion is murder."

Let’s look at another ideology Higbie covers – gun control. For liberals, "the second amendment does not give citizens the right to keep and bear arms, but rather allows the state to keep a militia, like the National Guard. For conservatives, "as Americans, we live under the Constitution, which lists God-given rights and liberties. One of these liberties is guaranteed in the Second Amendment: the right to 'keep and bear arms.'"

Conservatives believe in the United States Constitution and we do not consider it a "living document," as Higbie explains, that can be changed at will. We apply an "originalist philosophy" that considers the Constitution a "dead" document OR one that should not be changed.

The people who wish to manipulate others to embrace leftist ideology are leftist politicians, the media, the Deep State, RINOs, and Never Trumpers. Hollywood celebrities also push the narratives. Let's look at one of the quotes in the book by leftist actress and comedian Rosie O'Donnell on gun control, "I don’t care if you want to hunt. I don’t care if you think it's your right. I say, 'Sorry . . . We have had enough as a nation. You are not allowed to own a gun, and if you do own a gun I think you should go to prison.'"

If you have not read the Constitution and educated yourself, you may take the words of this Hollywood leftist seriously. As Higbie says, it's not about guns it's about control. The left wants to ignore the Constitution and tell Americans they should not have guns to protect themselves.

"There are too many gun control laws, and additional laws will not lower crime rates because criminals, by their very definition, disregard the law," says Higbie.  This is one of the best quotes I've ever seen in opposition to gun control leftists.

Higbie covers all other essentials, including affirmative action, the death penalty, the economy, climate change, religious freedom, and more.

For me, Obamacare is one of the reasons I'm no longer a Democrat. As I said in my guest post for Young Patriot Rising, Obama "messed with health care, threw up a website that didn't work and made it difficult for small business owners to afford it."

And as Higbie says, "The fact that Barack Obama, the man who proposed the bill, won’t even use it should be a huge red flag to everyone."

On immigration, Higbie says, "Let's be honest with ourselves: if the Democrats thought for one second that the illegal population would vote Republican, they would build the wall twice as high as President Trump wants to." And it's the truth. This is about power. By not caring about illegal immigration, leftists are hoping to secure more votes for their side.

Higbie gave a solution that I had never thought of before, and that's to make legal immigration easier. It takes years and lots of paperwork to immigrate legally to the United States. What would happen if the legal process were easier?

As far as multiculturalism and race relations, I wasn't 100 percent in agreement with what Higbie wrote. I'm an independent thinker first before I'm a conservative. Higbie doesn't like the term African-American, for example. He believes "all Americans are American," so don't use the terms African-American or Asian-American or whatever. He believes that we are not "subcategories of Americans" but one group of Americans.

Higbie is not worried about offending anyone, but neither am I. As a black woman, if I want to call myself African-American, or if I want to say black American, or if I want to just say American, that's my business. That doesn't make me less conservative if I choose to identify as African-American. I'm proud of my African heritage, and I'm proud of being an American. I also don’t have a problem with months like Black History Month. There's nothing wrong with learning about the history of black Americans and the contributions black Americans have made. For example, hair care has always been important to the black community. Did you know that Madam C. J. Walker, who invented a line of African-American hair products, and who died in 1919 at the age of 51, was one of the first American women to become a self-made millionaire? Facts such as this are important for black Americans, especially young black Americans, to know.

In addition to covering the various political ideologies, Higbie speaks about his personal experiences as a Navy SEAL, working for the Trump organization, etc. It's not all pretty, and he gets a lot off his chest in this book. Perhaps writing is "self-therapy" for Higbie.

I'm just a civilian. There's nothing I can do about how the military treats its soldiers and employees, for example. However, it's good to get Higbie's take on things.

Let me cite an example that I recently discovered. The 33-year-old actress and feminist activist Jameela Jamil tweeted, "To the people trolling me and Gloria Steinem because we said there is no democracy without a woman's right to choose...I SAID WHAT I FUCKING SAID and you're clueless if you think I'm going to take it back. My life *is* more important to me than an unborn fetus' one. Suck on that."

Her tweet angers me because it's self-absorbed, and it cares nothing for the life of an unborn child. It's like she's saying, "Oops! If I get pregnant, oh well! A baby is not gonna take nine months out of my life. I'll just get rid of it."

Aren't you sick of insufferable celebrities?  I am, and so is Higbie. He encourages us to stop listening to "morons" like actor and comedian Jim Carrey, who, despite being worth $150 million, embraces socialism. I'm sure the moron doesn't even know what socialism is.

Check out this one from the young leftist and gun control activist David Hogg. He tweeted, "America is not a melting pot - It's an extremely segregated salad held in a bowl build of institutionalized injustice, violence and genocide. It's time for us to toss the salad and abolish the bowl."

Hogg's tweet is one of the more ridiculous I've read. Hogg is nothing more than a useful idiot for the left, and conservatives should stop listening to him, too.  (I'm sure no conservatives take him seriously, anyway.)

Carl Higbie is an outspoken person, and conservatives need more of that. As he says about President Trump, "His ability to get punched and punch back is one of the key things that will save our country."

And in the book, he includes a quote from President Ronald Reagan, "Freedom is never more than one generation away from extinction. We didn't pass it to our children in the bloodstream. It must be fought for, protected, and handed on for them to do the same, or one day we will spend our sunset years telling our children and our children's children what it was once like in the United States where men were free."

I enjoyed CRISIS OF CULTURE and getting Carl's perspective. That said, the book did include a number of spelling and grammar errors. For example, throughout the book, Barack Obama's first name is spelled Barack in some cases and Barrack in others. I'm not much of a Grammar Nazi, and I make plenty of mistakes, too. I believe that the content of a work is more important than spelling and grammar errors. However, I'll go ahead and give this book 4 ½ stars rather than 5.

Next Up: Inside Trump's White House