My Book Review: Unplanned: The Dramatic True Story of a Former Planned Parenthood Leader's Eye-opening Journey Across the Life Line - An Eye-Opener 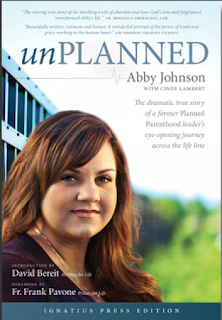 Although UNPLANNED was published in 2011 or so, I began reading the book for the first time about six months ago. In 2011, I was a pro-choice liberal who was crossing my fingers and toes that Barack Obama would be re-elected. I was nowhere near the conservative, pro-life woman I am today.

I didn't walk away from the Democratic party until 2015, and I didn't become pro-life until 2017. This is not to say that you have to be conservative to be pro-life. In fact, I hope more than just conservatives read this book. UNPLANNED is a book that every woman, and man, should read. It is a fascinating look at what goes on at Planned Parenthood and their relationship with the people on the other side of the fence – the pro-life people.

Abby Johnson started working for Bryan Planned Parenthood in Texas in 2001 and quickly worked her way up to health center director in charge of both family planning and the abortion programs. She left in 2009 to join the local pro-life movement, Coalition for Life, as a volunteer. She is the founder of And Then There Were None, which is a ministry that assists abortion clinic workers in leaving the abortion industry. She is also the author of The Walls Are Talking: Former Abortion Clinic Workers Tell Their Stories. She's married and has seven children.

When I started reading UNPLANNED, it was before I had the idea for this blog. I was just a casual reader. However, soon after I opened the book, I had to close it.

At the start of the book, Abby describes what happened when she was asked to help a doctor with an ultrasound-guided abortion at the Bryan clinic. She held the ultrasound probe as the procedure progressed on a 13-week old unborn baby. Abby could see "the profile of the head, both arms, legs, and even tiny fingers and toes." She vividly describes the abortion, one that is so horrible I put the book down, and I didn't open it again until six months later. It affected me that much.

Freelance writer and executive editor Cindy Lambert helped put Abby's words on paper. Abby said, "You captured my voice in every sentence. You are such a blessing to me." Yes, Cindy captured Abby's words perfectly. She is an excellent writer, and her ability to paint the picture Abby wanted us to see is well done.

Yes, the beginning was uncomfortable, but other stuff in the book was unpleasant, too. Abby doesn't hold back. She's honest about her Planned Parenthood experience, including her personal life.

Even when I was a pro-choice liberal, my attitude was, "I will never have an abortion, but I don't care if other women do." But Abby didn't just have one abortion; she had two of them.

I have to admit that as a newly pro-life woman, it bothered me that she had two abortions. I can't imagine how I would feel if I had aborted an unborn child, let alone two.

If I had had an abortion, would I think about it every day of my life? I raised two children, and they are two of the best parts of my life. Would I wonder what my unborn, aborted child would have looked like and what they would be like today?

But as Abby says, "My story is not a comfortable one to read," and she does an excellent job of explaining why pro-life people judging pro-choice people and pro-choice people judging pro-life people is not the way to go to reach the truth. She describes how the pro-life women and men that she encountered loved her long before she realized she would become pro-life herself. Abortion, for those who want to have honest conversations about it to reach the truth, is not a black and white issue.

Abby doesn't touch on those issues much.  What she does is tell her story of her progression from pro-choice to pro-life and her leaving Planned Parenthood. Along the way, she gives us information about Planned Parenthood that everyone should know.

Planned Parenthood says they deliver "vital reproductive health care, sex education, and information to millions of women, men, and young people worldwide." That sounds good. But what are they really? Is their focus on sex education, STD education, health and wellness, and birth control, or is their focus on abortions, a service that brings in the most money and can keep a struggling Planned Parenthood clinic open? What kind of approach do we have when the focus is on pushing abortions for financial gain? What kind of approach do we have when late-term abortions, something that nobody talked about when I was pro-choice, is becoming standard in our current society?

UNPLANNED is uncomfortable in parts but highly informative and eye-opening.  Abby covers it all from her beginnings as a pro-choice woman, to working in Planned Parenthood and encountering the pro-lifers who stood vigil at the nearby fence, to what made her quit Planned Parenthood, to her spiritual transformation, to a courtroom battle, to her life as a pro-lifer today.

I have not seen the movie "Unplanned," but I'm so glad I read the book. As with my other book reviews UNFREEDOM OF THE PRESS and THE RUSSIAN HOAX, I give this book five stars. I'll be reading lots of books for this blog, and I'm assuming I'll read many that won't get five stars from me, but that hasn't happened yet.

Next Up: The Harvest 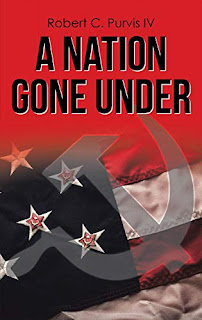