My Book Review: Triggered – The Best Book I've Read for this Blog So Far! 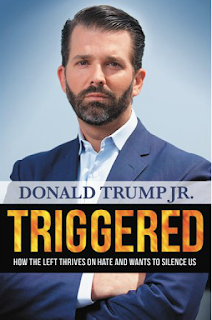 I'm excited about this book review because TRIGGERED by Donald Trump Jr. is the best book I've read for this blog so far! Eventually, I guess I'll read a conservative book that's not all that great, but it hasn't happened yet.

The 41-year-old son of the billionaire Trump is currently dedicating his time not to the many Trump businesses but the campaign of President Donald Trump. He also dedicated TRIGGERED to the Deplorables, and he said, "I am proudly one of you." He's not lying about that, and every Trump supporter had better be thankful we have an outspoken Republican in Donald Trump Jr. who is continuously standing up for us. Most Republicans are spineless, but not the eldest son of President Trump. (That said, Republicans like Jim Jordan and Devin Nunes, for example, are really making us proud.)

As Trump Jr. explains, the term "triggered" is when a person gets all upset about something someone tweets or says or does. (President Trump triggers the left more than anyone.) Conservatives typically get worked up over important things, Trump Jr. says. Abortion or attacks on the Second Amendment would be examples. But leftists get upset over silly things like someone saying "capitalism is better than socialism," or someone saying, "America is the greatest country in the world." And, as we've seen, the bar keeps getting lowered and lowered.

So at the beginning of the book, he gives everyone a "trigger warning." It's one of the best warnings I've ever read for those (leftists) who get their underwear in a twist at anything we do or say. He lets them know that, essentially, if you don't like it – leave. (In other words, if you don't like what he has to say put the damn book down.)

After the trigger warning, he says, "Are they gone? Good, I thought I'd have to break out my MAGA hat." I love Don Jr.'s sense of humor.

But along with his sense of humor, he thoroughly explains why things have gotten out of control in America. "We've elected socialists to our Congress, allowed anti-Semitism to run rampant throughout our government, and allowed our most important media institutions to be run by angry mobs and leftist activist 'journalists' on Twitter."

Leftists love to call conservatives racists, homophobes, xenophobes, and every other kind of phobe when you disagree with them. They're not interested in facts. It's all about hysteria. And one of their goals, as Trump Jr. explains, is to "cancel" you for not being "woke" enough. They do it to comedians, for example, like Dave Chapelle. However, like Donald Trump Jr., Chapelle has a fighter instinct. So trying to "cancel" him isn't working. "Anything that makes the veins in a few liberal foreheads bulge out is fine by me," says Don Jr.

One of the reasons I read conservative books is to learn why this is happening to America. I got angry enough to leave the Democrats for good. Read why I walked away HERE.

There are so many horrible things that have happened to this country and our 45th President. After the Russia hoax failed for the leftists, they quickly moved to the next hoax. If they cared about America, they would be happy that the Mueller report showed no collusion with Russia, but as Donald Trump Jr. explains, they don't care about America. They care about resisting Trump, and that resistance, such as the Russia hoax, began even before President Trump was elected.

After he was elected, leftist pundits bawled on CNN, MSNBC, and other fake news media, and The Resistance rioted in the streets. They didn't care that Hillary Clinton had said, "Anyone who doesn't accept the results of an election is a threat to democracy." As a new conservative, I've learned that whatever leftists accuse you of, they're guilty of doing it. I've never seen such a level of hypocrisy.

But as Trump Jr. says, the Democrats can't survive without preaching a dependence on big government. Dependence on government is their "power source" while "self-sufficiency and independence are their Kryptonite."

And he explains how support for Trump continues to grow, including among African-Americans. After this book came out, and the Emerson and Rasmussen polls showed increased support for Trump by African Americans by as much as a total of 34 percent, Ana Navarro tweeted," Zero chance this is accurate. Zero. The poll must have only been conducted in the homes of Ben Carson, Kanye, that sheriff guy with the hat and those two Cubic Zirconia & Polyester-Spandex ladies." Navarro is that disgusting RINO seen on CNN and "The View." Her tweet is racist. It implies that black people can't think for themselves.

As for me, I refuse to do a James Woods. He is not banned from Twitter. He could get back on Twitter if he followed their demands. However, by him not returning to Twitter, they get what they ultimately want - silence. Until someone comes out with a FAIR platform as powerful as Twitter (Parler doesn't cut it, guys), they will have to ban me outright before they silence me.

As conservatives, we can't just complain; we have to fight. That's why I not only like but also respect Donald Trump Jr. He's a fighter, just like his dad.

Another thing Trump Jr. does in TRIGGERED is go into the ways the left has manipulated who we scientifically are. I was born a woman. If I slap on a mustache and wear a men's suit, I'm still a woman. "In this new alternate reality of the left, crazy old ideas such as 'age' and 'gender' and 'sanity' don't matter anymore," says Don Jr. "It is no longer anyone's business what sex you were assigned at birth; all that matters is how you feel."

It's craziness. I'm glad that my children, now adults, went to school and participated in sports before this madness began. My daughter, for example, was a competitive swimmer. I'm glad she didn't have to compete with a male who thought he was a female even though he was born with a penis.

As Trump Jr. says, "For too long, we have allowed the laws of our nation to be written by its most aggrieved, least stable citizens. We've pandered to ideas that have no basis in reality because we know that the people who came up with those ideas will turn the social justice mob on us if we don't."

Trump Jr. covers it all in TRIGGERED, including the mainstream media, most of whom are simply extensions of the DNC. "All the cable news network does is lie, get caught, and then blame someone else." Exactly. He goes into Sleepy Joe, Hunter Biden, all of it.

I don't have any power, but I won't let the left force me to accept things I don't agree with. I'll always follow the laws, but I will always speak my mind. "Donald J. Trump single-handedly pulled American conservatism back from the brink of extinction," says Don Jr.  I know that no other Republican could have beat Crooked Hillary, and no other Republican would have exposed the media, the Deep State, and everyone else who resists Trump.

TRIGGERED is an excellent must-read. At the back of the ebook I own, Trump Jr. also gives us plenty of pics to view and enjoy.

Next Up: Crisis of Culture