My Book Review: The Harvest – Take Your Time With This One 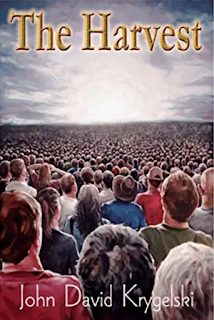 I review conservative nonfiction books. However, every once-in-a-while, I may review a fiction book. As long as it's on the right side of the aisle, I'm cool with it.

You could call THE HARVEST, published in 2007 by John David Krygelski, to be religious science fiction or a religious thriller. Take your pick. This incredible book is not only spiritual but philosophical, scientific, and conservative.

Novelist Krygelski is a semi-native of the southwestern desert. Besides THE HARVEST, he has authored many novels, including THE MUTATUS NULLIFICATION, THE MUTATUS PROCEDURE, THE AEGIS SOLUTION, and more.

In THE HARVEST, we're introduced to a figure who magically appears on Earth. He looks like a human male with thick white hair and blue eyes. We soon learn that his name is Elohim, and he claims to be The Creator, otherwise known as God. (Elohim means "God" in the Hebrew Bible.)

The U.S. government is perplexed by Elohim. They want the famous Religion Professor Reese Johnson, who recently left the stranglehold of leftist Harvard to teach his courses at the University of Arizona, to authenticate Elohim. Most importantly, Elohim says he has come to Earth to take the Chosen to Heaven in five days.

In fact, if you haven't read the Bible, but you want to, consider making it a New Year's goal.  Also, I recommend for women (because I am a woman) the Women's Devotional Bible. There's a reading plan that will take you through the entire year, plus there are devotions throughout the book written by women.

Getting back to THE HARVEST, because it is not some famous book discussed on a show like "Hannity" or "Tucker Carlson," you may not have seen it or read it before. So I don't want to ruin anything for you.

What I will say is that when The Creator appears, Krygelski takes you through what could happen. Even though this is fiction, none of it seems unreasonable as we follow the course of events and the way people respond to who Elohim is, what he does, and what he wants. He speaks every language; he performs miracles; he knows what you're thinking, and if you're the Chosen, he wants to take you to Heaven.

In THE HARVEST, nobody who discovers they are the Chosen goes to Heaven against their will, and you could find yourself in a situation where you are the Chosen, but your spouse, for example, is not.  Will you go or will you remain?

It's an exciting adventure for conservatives who believe in God and who respect conservative principles. Is it biased? Yes. Are the villains leftists? Yes. However, if you're a conservative, none of that is going to offend you.

What you will find is that Elohim's words of wisdom will make you think about yourself and life in general. "If you believe that you should be of the Chosen and find that you are not, I ask that you blame no one, other than yourself, because no single person on Earth has faced an unfair test," says Elohim. This aligns with the conservative view of personal responsibility, a view that's important to me.

It makes me think of a quote by Gina Florio, a personal trainer, wellness coach, and a manager for Candace Owens. She says, "No matter what life throws at us, the result is in our hands. So yes, your life is your fault. My life is my fault."

THE HARVEST is an adventure, but it's not one you should rush through. It's over 400 pages. In today's society, that could be a turn-off. People are busy with their phones, the internet, and video games. Books with a lot of words and pages are becoming a thing of the past. But this book is far from boring.

If it takes you two weeks, a month, or six months to read it, that's okay. As I said on Twitter, savor it like a fine wine.

THE HARVEST contains vivid mental images, religious depictions, and scientific information that will sit with you. You may even dream about them.

I usually don't provide links to the books I review, but I will with this one.  You can purchase a signed copy at Starsys Publishing. Or buy the book at Amazon or iTunes. Follow John David Krygelski on Facebook and Twitter.